Previous Next
The Arctic 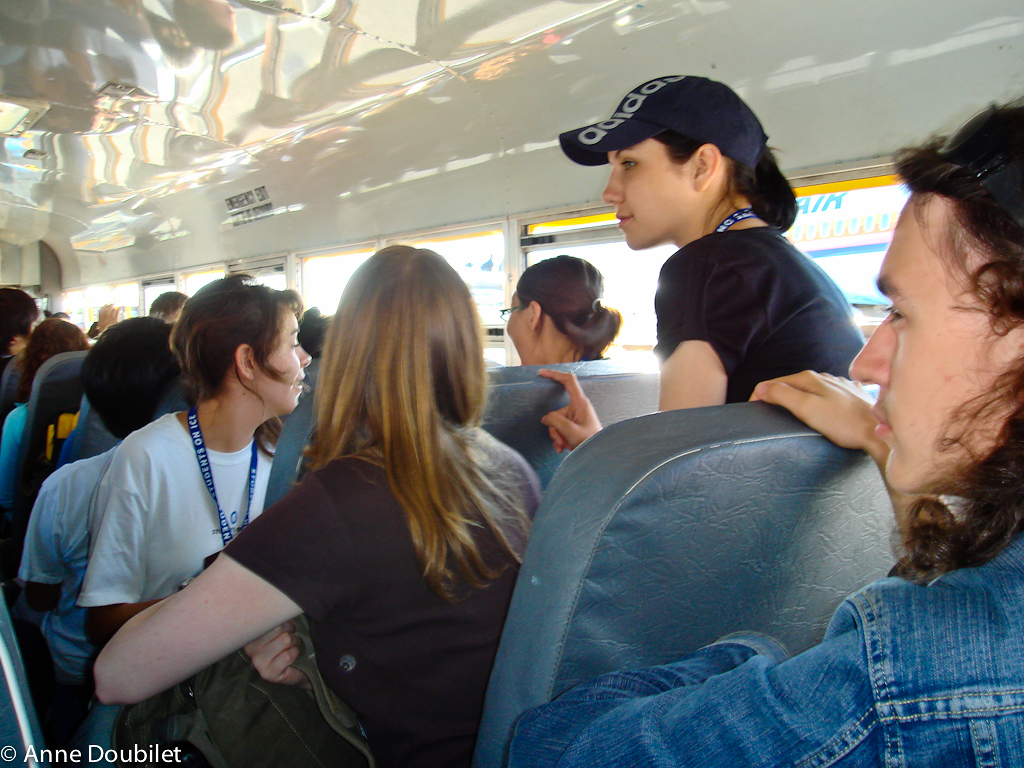 I went to the Arctic during my epic 2007 summer when I journeyed from Papua New Guinea in the southern hemisphere to the top of the world. I was a photography advisor for Students on Ice, an exciting Canadian organization that takes high school and college students on expedition to the Arctic in August and the Antarctic in December/January with the goal of educating all to become “Ambassadors of the Environment.” We started out in Ottawa where 30 staff met up with 70 high school students from all over the world–Canada, the U.S. Europe, India, Russia and several northern Inuit students some of whom had never left their villages nor been on an airplane. We boarded a plane for the 4 hour flight fom Ottawa to Churchill where we were to meet our ship, the MV Orlova.

In a day of exploring Churchill we walked along the shores of Hudson Bay hiking over slippery rocks coated with ancient lichens and saw beluga whites out in the grey water. We visited a polar bear holding pen–which was empty–built for hungry, marauding polar bears who invade the town for garbarge threatening the local population. The starving bears are held in the pen until they can be released back into the wild during colder weather. Warmer temperatures mean less ice time and therefore less food for the polar bears. Their existance is seriously threatened. 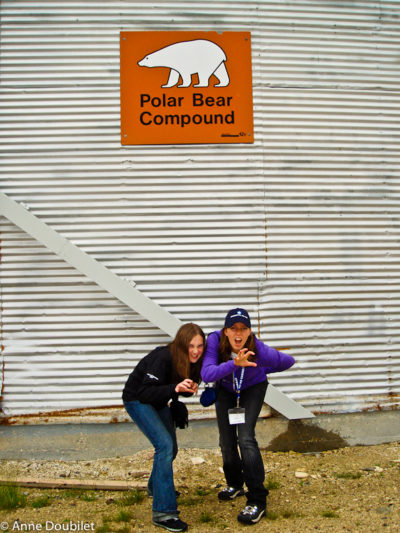 We boarded Orlova which would be our home for the next two weeks and set off across calm seas in these surprisingly warm temperatures. 2007 was the first time since record keeping started that the Northwest Passage was free of summer ice. 2010 was the second. Within hours a pod of Orcas came spouting ship-side and our screams of excitment filled the air. Huge marine mammals cause wondrous feelings in humans! Twelve rubber Zodiac boats kept on deck were lowered each day as weather determined our landings and Zodiac cruising schedule. Because of quickly and constantly changing conditions, Geoff Green, expedition leader and founder of SOI, established our credo: “flexibility is the key!” 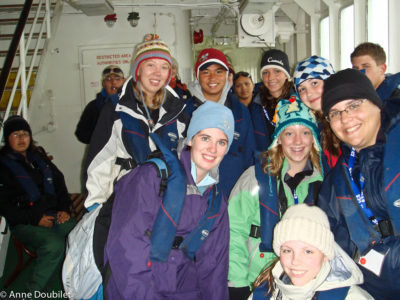 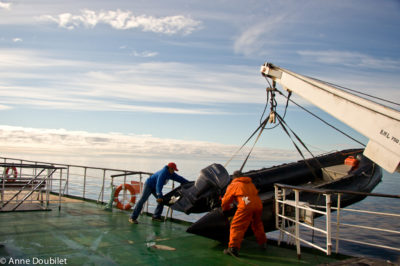 Our route took us across Hudson Bay and through Hudson Straits to the southern part of Baffin Island and the beginning of the Arctic Circle. Zodiac cruising around Walrus Island–on the far side from a large walrus colony– we spotted a mother polar bear and her cub feasting on a walrus carcass. Surprised at this weakened and hungry bear able to kill a large walrus, we learned the next day via radio phone that poachers had killed the walrus for the ivory tusks–which is why we saw no head. In the Lower Savage Islands we have our second and only other sighting of one lone polar bear climbing over slippery rocks in warm mist and fog.The rocky promontories of Cape Westonholme house thousands of nesting Muir and other sea birds. It’s a cacophony of bird cries and whirring, circling wings over a flat, calm sea

The villge of Kimmirut, tucked inside a proctective bay, is our first visit to an Inuit community after Churchill. Kimmirut houses a group of well-known Inuit carvers and artists, and a group of local inhabitants greets our Zodiacs and leads us on tours around the town. Despite the remoteness of this village, rock and rap music has reached Arctic kids and many of the children graciously pose for all our filming. A seal has been caught and will be served to us—raw and cubed—as honored guests. Sadly PCB’s and flame retardant chemicals have also made their way up to this remote  part of the world—traced in the flesh of seals and whales—and identified in the breast milk of Inuit mothers. The work of Dr. Susan Shaw at the Marine Environmental Research Institute in Blue Hill, Maine has been gathering this data for the past 20 years.

Kekerten Island, now a national park, is one of many old whaling stations that dotted this area where bowhead whales were hunted almost to extinction. Huge kettles and containers—now rusted artifacts serving as reminders of past whaling days– were used for rendering down and storing blubber. A gigantic bowhead skull shrouded in eerie silence and placed on the landscape also marks this area where hundreds, thousands of bowheads were hunted over the years. It’s almost as if the few remaining leviathans steer clear of this island where their ancestors were slaughtered. No bowheads have been spotted here for years. In just a few hours of bright morning sunlight, three lonely pieces of ice—tiny harbingers of the coming winter—dot the shoreline. 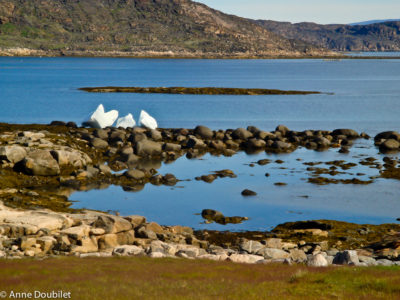 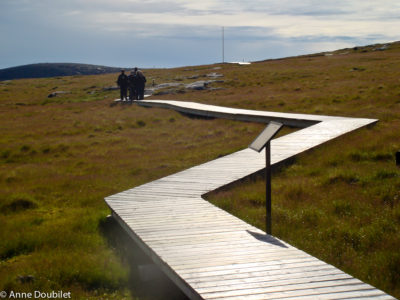 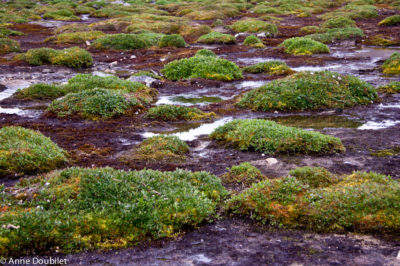 Grasses and flowers are still blooming in the soft, summer tundra of Padloping Island making hiking difficult through the ankle deep –sometimes mid-calf deep–mud. Dotting the shore are rusted, abandoned hulks of old U.S. military equipment adding a silent and shocking blight to this pristine landscape at the southern edge of the Arctic Circle. Then during the last two days of our voyage we finally spot ice as we cruise into Hoare Bay. It’s all hands on deck as everyone rushes outside into the finally freezing air shouting with excitement and wonder.

This surreal land and seascape is what we came to see. The captain inches us slowly into the pack ice just to give us a feel of what it’s like. The Orlova, however, is ice-capable not an ice-breaker so we hover at the edge of the 9/10s surface covering. Pack ice is rated on a scale from 1 to 10 and we launch into Zodiacs to cruise closer to the ice. I can’t resist—I reach out from the Zodiac to touch an iceberg like some forbidden artifact in a museum of shrinking ice. Then for just one hour in Butterfly Bay, the sun breaks out and everything changes from monochromatic grey to brilliant sky blue and turquoise and glistening white. Once again in another part of the world, I am Alice entering Wonderland. 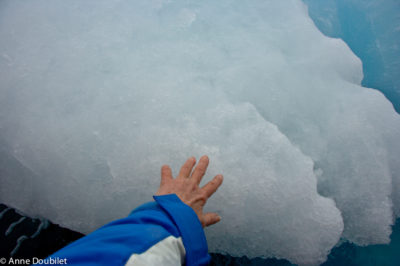 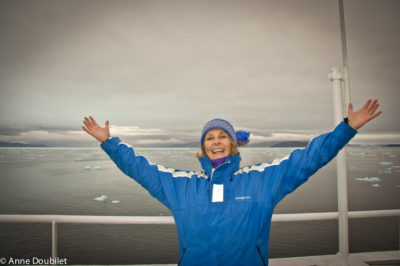